How to boost milk production in cows

Proper feeding, hormone treatments and of course good livestock management practices are among the strategies that you can use to boost milk production. Before we get into these strategies it is important to know a few facts about milk and milk production in dairy cows:

The most critical period of the cow’s lactation is the time from parturition to peak milk production. During this period you can set the stage for obtaining the highest possible peak in milk production.

A dairy cow needs two primary components in her diet to be able to reach her peak in milk production. From the milk composition, the two very important components are energy and protein. Other important components are minerals and water. Energy is provided in form of cellulose available in roughages such Napier and Rhodes grass hay and other grass pastures and fodder. Due to limitations in the utilization of cellulose by the dairy cow, energy is often supplemented by giving concentrate feeds such as maize germ meal, cereal grains such as oats, barley, maize or wheat; industrial by products and a wide range of premixed feed.

Grasses are good sources of energy but their protein content are however too low to meet the cow’s needs for higher milk output. They may have adequate amounts of protein for animal maintenance but for a lactating dairy cow, higher protein feeds will be required to increase milk production.  Protein is provided by legumes, fodder trees and premixed feeds or industrial by products.  Legume species commonly used as pasture or fodder in Kenya such as Lucerne and Desmodium are good sources of proteins for the dairy cow. Feeding leafy Lucerne hay at 2 to 4kg per 100kg of body weight will be enough for her maintenance needs.  However, as in the case of energy, the cow will need extra proteins to reach her milk potential. These extra sources of protein are available in form of commercial protein supplements.

From these feed sources you need to work out a ration that will supply the nutrients at their correct proportions. As you are formulating a balanced diet  note that the cows have a requirement for fibre. Inadequate amount of fibre in the diet and poor fibre digestion often lead to poor rumen fermentation which may result in insufficient acetate and butyrate production necessary for optimal milk fat production. Balance the diet for fibre requirement first, then protein, energy and other nutrients. You should have at least 45% of the diet dry matter as forage and forage substitutes.

Feeding yeast (brewer’s yeast) can optimize the digestion of fibre. Yeast stabilizes the rumen pH and increase the number of bacteria necessary for digesting fibre and the net result is higher milk yield.

Consequently to increase milk protein and hence milk production, you will need to increase the amount of microbial protein available to the cow. You can increase the supply of microbial protein by optimizing rumen fermentation and replacing part of the starch in the diet with sugar. Sugar stimulates the growth of rumen bacteria. Adding ¼ to ½ Kg of supplemental sugar in some diets generates a protein response.

However much the rumen microbes synthesize amino acids, the quantities produced will not be enough for the cow to sustain high milk yield. The requirements for milk production are higher compared to what the microbes can produce. Dietary protein will therefore be a necessity. The dietary protein escapes digestion in the rumen and is digested in the small intestine where they are used for synthesis of milk protein and tissues. Diets of dairy cows should therefore contain quality dietary protein in adequate amounts.

When the glucose supply in blood is insufficient the cow will use amino acids to make glucose. This decreases the amount of amino acids available to make milk protein. An adequate amount of glucose should be in the diet to ensure high yields of milk.

During early lactation when dry matter intake decreases, the energy density of the diet should be increased to improve energy intake. This can be done by feeding grains or fat. However, high levels of grains can cause metabolic disturbances such as rumen acidosis. Supplementation with fat is preferred because of other benefits such as increased absorption of fat soluble nutrients and reducing dustiness of feeds.Also, feeding fat to dairy cows generally improves fertility.

When there is enough energy in the diet more of the total protein needs of the cow can be supplied by non-protein nitrogen sources such as urea. Production of protein in the rumen by microbes depends largely on the availability of carbohydrates and nitrogen in the rumen. Rumen bacteria have the ability to utilize ammonia that is released in the rumen but if the energy available is inadequate, the net result is reduced synthesis of microbial protein.

Although a number of minerals such as calcium and phosphorous are essential, one that is frequently very critical is chromium. Chromium enhances the utilization of glucose. This is critical during the 3 weeks period prior to and after the cow gives birth because it will determine the milk production during early lactation and the general health of the cow.  During this period the cow does not eat much, often resulting in a negative energy balance. The outcome of efficient utilization of energy during this period is higher productivity and better health.Supplementation with Chromium also improves reproductive performance and reduces the effects of stress.

Then you need to check whether  your livestock getting enough minerals? in form of salt. 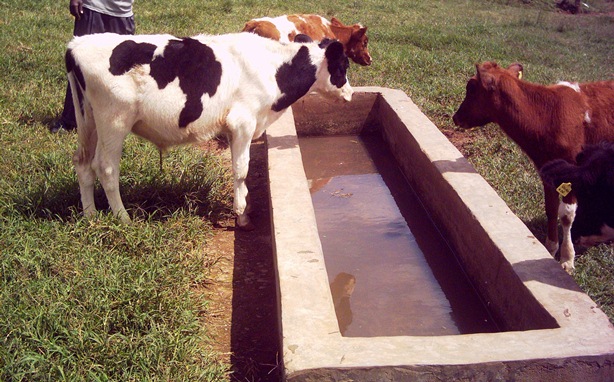 A lactating cow can drink up to 120 litres of water per day, therefore plenty of clean fresh water should be provided. The cow should drink to her fill whenever she requires.

You may use hormones to increase milk production but note that this area is very controversial. There has been debate on whether the use of hormones on dairy cows is safe or not to both the cow and humans.

If you take this route, there is a hormone called recombinant bovine somatotropin (rbST) which can be injected to the cow to produce more milk. The artificially synthesized rbST is in all ways similar to the naturally occurring bovine somatotropin (bST) produced by the cow. These hormones stimulate the udder to absorb more nutrients from the bloodstream thereby enabling the udder to make more milk. A cow that is treated with rbST can make 5kg more milk per day than those not given.

If you have to administer this hormone, then the cow must be fed extra feeds to make up for more energy that will be needed to make more milk. She will need about ½ kg of more balanced feed for every kilogram of milk she produces per day.

The health of the cow is also important here else the hormone treatment will not help her make more milk.

Some people do not have a problem drinking milk from cows that are treated with rbST but due to the controversies surrounding the use of these hormones, many traders and consumers have chosen to use milk from farmers who do not use rbST.

One of the major expenses in milk production is the cow feed. As a farmer you should strive to produce quality feeds at the least cost. Focus on producing feeds that are highly nutritious and have high productivity per area.

The nature of the cows housing has direct influence on her health and productivity. Good housing systems takes into account the cows’ behavior when feeding, drinking, lying, raising and walking.

Strive to have the same number of calves born every year as the number of cows in the herd. Choose a bull or AI that is likely to breed cows with a high genetic potential for milk. Sell the males calves at an early age and keep the females as replacement milking cows or for sale.

Good calf rearing ensures a good foundation for the future dairy herd. The aim is to lower the death rate by proper feeding and housing. This way you will have replacement cows that start production early and improved genetics of the herd.

Many farmers would do better if they embraced sound management practices, balanced their feed rations and improved their farm operations.