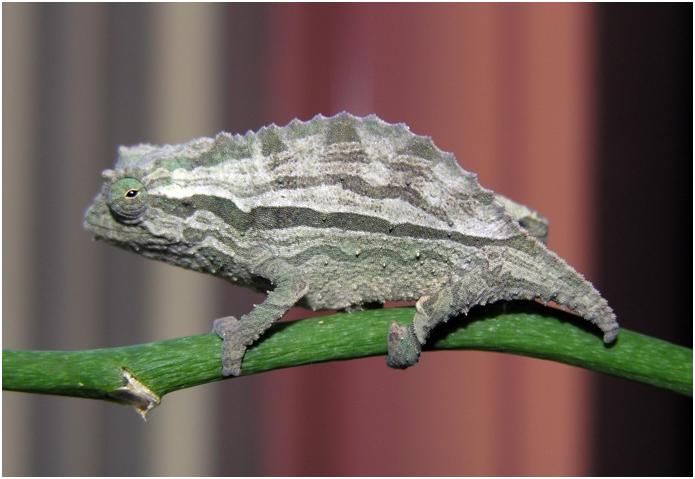 Chameleon farming is a lucrative business undertaking in Kenya. With little investment farmers already in the business are making good money. Farmers just require a small space and a net to fence the area, then create ways to attract flies and other insects. Areas with cool climate are most suitable but the business can be practiced under controlled conditions in other parts of the country.

An important aspect is the acquisition of a permit from KWS because chameleons and other wildlife are protected by law. There are not many chameleon farms in the country. Tanzania is far ahead with more than 40 chameleon farmers whereas Kenya has only four. So far Madagascar leads in chameleon farming with average sales of 66,500 chameleons from five different species.

The fast economic and environmental changes have caused many countries to consider diversification from keeping conventional livestock to game farming. Besides agricultural production farmers are now getting involved in plenty of other economically sustainable activities in the wildlife sector, such as chameleon farming.

The commonly kept species include the jacksonii, pardalis, calyptratus, quadricornis, melleri, deremensis, lateralis, gracilis, dilepis, and even the tiny ellioti.  Others are members of the generaRhampholeon and Brookesia but the most preferred and popular breed of chameleon is the Jackson's chameleon.

The Jackson's chameleon (C. j. xantholophus)is the predominant breed in Kenya.During the 1970's thousands were shipped from Kenya by Jonathan Leakeyand became very popular in the international market owing to its big size. The species is commonly found in Central Kenya around Kagumo,  Kerugoya and Meru where it is locally known as Kembu. It thrives well in areas where seasonal rainfall exceeds 127 cm per year and daytime and night time temperatures range from 16-270 C and 4-180 C respectively.

Adult Jackson’s chameleon males are light emerald green with vaguely defined yellow along the throat, shoulders, flanks, and crest scales. The males have three horns and generally attain a length of 25-30 cm.

Females are commonly 5 cm shorter than males. Those that have horns have them in greatly reduced forms. The female body color and that of immature males varies, ranging from gray to green to dark olive.

The tail accounts for about half of the animal's length.

The basics of chameleon farming are the set up, the husbandry practices and the breeding management.

The set up main consideration is caging. Chameleons tend to die in cold seasons therefore proper cages that maintain good heat are vital.  Cage design should also consider feeding, cleaning and other types of routine maintenance. Chameleons need lots of ventilation so a screen enclosure is the most ideal. They require special lighting and frequent misting several times a day. Live plants are more preferable than plastic because they keep the humidity levels up. Lighting provides them with warmth when temperatures are low, whereas other components of light are necessary for the chameleon's physical health and mental health.

Generally chameleons will not drink from standing water. In the wild they drink dew from leaves or as it collects on their bodies. Water should thus be provided in a way that resembles rain drops or dew on leaves. Misting a minimum of 3 times per day is recommended. A waterproof catch basin in the enclosure is needed to remove excess water.

The diet is of paramount importance. All chameleons need variety in their diet. Therefore, you'll need a source for quality insects. Chameleons generally feed on small invertebrates hence a natural environment where these are available is ideal. Foraging occur throughout the day. Any method of attracting insect that is not harmful to the chameleon can be employed.Feeding strategies include provision of optimally balanced diet during pregnancy to maintain good health until the females lay eggs. Also note that chameleons are cannibals with male chameleons feeding on the young ones. Offsprings should therefore be separated from adults as soon as they are born.

Chameleons rarely change to a new plant because to do so imposes high risks. Therefore, food and water must be provided regularly wherever they reside.

Chameleons seem not to care for their young and it is therefore crucial for the farmer to ensure their survival. As a precautionary measure young ones should be housed individually to avoid physical violence. Chameleons generally do not tolerate the presence of their members. Notable exceptions are the tiny genera Rhampholeon and Brookesia.  But even then, two adult males should not be housed together. They require individual housing and this means visual as well as physical isolation from other chameleons. There are a number of housing techniques for the rearing of neonatal and juvenile chameleons.

About 2000 chameleons are sold annually to the local market in Kenya. Only a few people, mainly the expatriate community, decorate their houses with chameleons hence the small size. The local market is faced with other marketing challenges associated with beliefs and attitudes towards the chameleon. This belief and attitudes need to be busted for the market to expand.

To export chameleons, farmers must get legal export and import papers. Chameleon farmers must first seekapproval from KWS, and must fulfill CITES and export requirements of the destined countries to enable them obtain these papers.