Legume species commonly used as pasture or fodder in Kenya

There are many legumes species commonly used for pasture or fodder in Kenya but only a few are important. Legume species are important supplements for livestock and at times ca completely replace purchased feeds if used properly.

This is a creeping and twinning perennial legume which climbs on anything nearby. It is mostly found in highlands and mixes well with most tall grasses. It smothers dwarf grasses.

The palatability is moderate but protein content is high. It can withstand heavy grazing and not easily shaded out.

It does best in medium to high altitude where the rainfall is more than 1000mm/year. It has a well developed root system therefore can survive in a wide range of soils. However the phosphate in the soil must be enough for nitrogen fixation.

The legume cannot withstand water logging. It is established by seeds at a rate of 1 – 2 Kg/ha which should be first inoculated with the right bacterial strain especially GB-1103.

This is a very robust trailing deep rooted legume. It has hairs on its surface and usually clings over grasses by means of fine hooks on the stems.

The legume is very nutritious with high protein content and very palatable. It is resistant to grazing but special management to regenerate is needed before animals are brought back after grazing. If this is not done the crop can easily disappear.

Establishment is through seeds at a rate of 1 – 3 Kg/ha and should be inoculated wth CB-627 strain of bacteria before sowing.

This legume is similar in characteristics to green leaf Desmodium except that the leaves has a silvery appearance.

Both do well in medium to high altitude areas with over 875 mm of rainfall per year. Inoculation is done the same way.

This is a trailing and twinning perennial legume. It has long stems that root easily which makes the crop resistant to drought. It has a large rooting capacity and the stems are hairy, unsymmetrical leaves which are very large.

The legume does well in areas with as little as 750 mm/year of rainfall but is very demanding on soil requirements. The soil must be fertilized properly with the appropriate fertilizer especially the phosphorous and potassium. However, if grown in areas high in organic matter fertilizers may not be applied.

The legume cannot tolerate any water logging and is killed within 24 hours.

Establishment is by seeds and no inoculation is needed because bacteria form associations freely with the plant.

This is an erect and deeply rooted legume not suitable for grazing. If it is to be grazed a sound rotational pattern is required.

It is highly palatable and very nutritious with high protein content mostly used for hay making.

The legume requires deep fertile soils, well drained neutral to alkaline soil. The crop is sensitive to acidity and very sensitive to phosphorous, sulfur and boron deficiency therefore fertilizer application is necessary. The crop is not useful in very dry areas because it tends to shed its leaves prematurely. Irrigation is important in dry areas.

It is established by seeds at 3-4 Kg/ha. The seedbed should be well prepared and the seed should be inoculated but if the area had Lucerne growing previously then inoculation is not necessary.

This is a shrub that if uncontrolled can grow into a small tree. It produces high quantity of animal feed with high protein content. 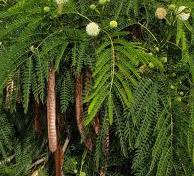 The legume can be browsed by cattle and other herbivores but browsing  should be when the branches are less than 7 mm in diameter otherwise the fiber content will be high therefore proper management is required.

If not used for grazing then it can be harvested by cutting the branches when it is 90cm high. This can be repeated 3 – 4 times a year. The harvested material is coarser than the browse therefore should be used as supplement with other feeds. The yields are around 2700 – 4500 Kg/ha/yr with protein content approximately 20%.

They are deeply rooted therefore can withstand long dry periods. It grows in low to medium altitude areas but not in highlands. Establishment is by seeds and inoculated with CB81 bacterial strain. Before inoculation the seeds should be scarified to allow germination. Scarification may be by fire, sulphuric acid or hot water. Hot water at 80oC for 2 – 3 minutes then drying is usually preferred before inoculation.

This is a deep rooted perennial erect shrub but not as branched as leuciana. The stems are coarse and hairy while the leaves are small and sharply pointed. 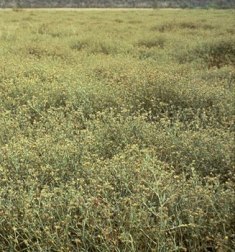 The legume is fairly productive but not very palatable to livestock and takes a while for animals to get used to it.

The palnt require warm climate therefore does best in low to medium altitude areas with annual rainfall above 875mm. It is sensitive to shading therefore growing with other crops needs much consideration. It is tolerant to low soil fertility however apply phosphorous fertilizer for improved production.

It is established through seeds which may or may not be inoculated.

A small perennial legume with smooth leaves and stems. It spreads freely by runners which root freely. Very palatable and nutritious, it mostly grows in association with Kikuyu grass.

The legume cannot grow well in altitudes below 1700m and annual rainfall cannot be less than 875mm. The soils should drain freely and be fairly fertile.

It is established by seeds but in Kenya they establish themselves freely. There is no need for inoculation. The legume is sensitive to shading therefore grows well with short grasses especially Kikuyu grass.

Sesbania is a rapidly growing perennial tree that establishes easily and grows in difficult conditions. The tree can grow up to 15 m tall. It is well adapted to hot, humid environments in areas receiving about 800 mm. They are tolerant to both saline and alkaline soil conditions.

Usually established from seeds, S. sesban have a hard seed coat and scarification is recommended to ensure uniform seed germination but S. grandiflora is not hard-seeded and germinates well without scarification.

S. grandiflora cannot survive repeated cutting but the side branches can be cut for fodder. The trees are grown at 1.5-2 m intervals and forage can be harvested for 3-4 years, yielding up to 2 kg dry matter per harvest per tree. However S. sesban thrives under repeated cutting and coppices readily with many branches arising from the main stem below cutting height. Three to four cuts per year is recommended but up to eight cuts per year can be achieved.

Common Vetch is an annual climbing legume with semi prostrate stems and multiple green to dark green leaves. It is tolerant to light grazing and re-grow in pastures after moderate grazing. It forms dense, green foliage, 40-80 cm high. It has a very high animal feeding value that makes it excellent feed for growing and finishing livestock. It is readily consumed by livestock, either as green or dry feed, including mature seed pods. Dry residues of plants and pods provide a useful grazing crop.

Vetches are potentially adapted to most areas of the Kenyan highlands. They are adapted to a wide range of soils but prefer neutral to alkaline soils.

Vetches have a strong root system but are not well adapted to water logging. Planting should be no deeper than 3/4" into the soil and spacing at 17-19cm between rows. Triple Super phosphate fertilizers can be applied at 50-75kg/ha at sowing to provide a good start and growth but can be grown without fertilizer with good results.

The best time to harvest is at the flowering-early podding stage. At this stage the balance between feed value and yield is the best. The yields average 1.2t/ha under dry land conditions.

They can be grown in mixtures with with a range of short grasses like Kikuyu grass. For quality pastures use a mix of 2/3 vetch and 1/3 of grasses. Seeds are inoculated by Commercial Group E of bacterial strains.