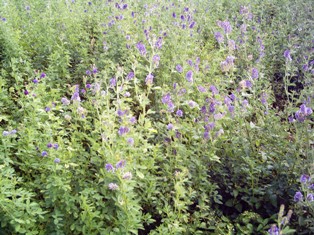 Lucerne, also known as alfalfa, is the single most important fodder crop that a dairy farmer should always have in the farm. The term Alfalfa is an Arabic word meaning “best fodder” because of its palatability and high feeding value. It can substitute up to 80% of commercial feeds purchased for the dairy cow. Despite the immense benefit it can bring many farmers have not seen the need for establishing the crop. Lucerne can grow in many areas across the country.

The practice by many farmers whenever they desire to increase the area under pasture is to cultivate more forage rich in carbohydrates such as Napier grass, Rhodes grass, fodder maize, fodder sorghum and the like. It most often happens out of ignorance on the feeding and nutrient requirements of farm animals. More quantities of the same type of feed are then presented to animals. The end result is more areas under forage but with insignificant or no increase in the amount of milk produced, so that the farmer is left wondering whether the output was worth the investment.

Lucerne is not the only legume that can be incorporated in the pasture profile. There are many legume species commonly used as pasture or fodder but when compared, lucerne comes out with gleaming attributes. It has very high protein content (15 – 25%), highly digestible (60 – 75%) and has high levels of energy (ME 8 – 11MJ/kg DM). It comprises about 50% of all protein supplements in livestock feeds. It can be pelleted and stored in bags.

Lucerne grows well in deep soils that are not acidic. Acidity in soils can be corrected by applying lime. If the area is dry the crop can be put under irrigation. The plant is perennial with very deep roots that can go up to 6 metres under, so it can survive drought once established. It can be harvested 3 – 4 times in a year if the rains are good. There is no need of replanting because it has the ability to re-grow from the cut stems. This ability to re-grow is very important because it eliminates the need for recurrent land preparations and sowing.

To the farmer, the most important quality of lucerne is its ability to be conserved. Other legumes have very poor keeping qualities. Lucerne can be conserved as hay and fed to animals at a later date. This is important during dry periods when pastures are scarce, but even more important is that it allows the farmer to organize a comprehensive feeding plan for the herd. The assurance that adequate quantities will be available throughout the year makes it possible to formulate suitable rations and project the potential amount of milk that can be produced in the year.

One impediment that has faced farmers is their lack of knowledge or skills on how to establish the crop. Many farmers simply purchase lucerne seeds from agrovets and sow them directly into improperly prepared seedbeds. Some of those who have attempted to inoculate the seeds have done it wrongly. The outcome has been very poor germination thus discouraging the farmers from establishing the crop.

The correct way to establish lucerne is by first properly inoculating the seeds. Appropriate inoculants are available in agrovets. For a good sticker make a solution of sugar or molasses in molasses to water ratio of 1:4. Thoroughly mix the sticker with lucerne seeds ensuring that all the seeds are covered by a thin layer of the sticker.  Then pour the inoculant on the mixture and mix thoroughly. Do not expose the inoculant to sunshine because it can kill the bacterium. Coat the resulting mixture with lime. This activity should be carried out shortly before sowing.

Use certified seeds to sow on rows 45cm apart on a fine, moist and weed free seedbed at a rate of 3 – 4kg per acre. The soils should be deep and well drained. Avoid any soils that are saline, waterlogged or have damaging herbicides. To avoid scorching of the seeds with fertilizer, ensure that the seeds do not have direct contact with fertilizer by mixing it with soil before sowing. Sow the seeds shallowly at a depth of 5 to 15mm and cover with light soils because they may not emerge if sown deeper than 20mm and covered with deep soil. Lucerne need sufficient moisture to germinate therefore sow the seeds at the beginning of the rainy season or when you are sure that enough rains will follow soon. Irrigate the seedbed if the soils are dry and continue this until all the seeds have germinated and strong enough to withstand low moisture levels. Ensure that there are no weeds affecting the crop.

Depending on rainfall and climatic conditions, the first cut should be made when the crop is around 40mm tall, has several stems and appears bushy. Cut when about 10% of the crop is flowering because if done earlier it can reduce the lifespan of the stand. Thereafter the crop can be harvested every 4 -5 weeks under irrigation or 3 months under rainfall. This can go on for 5 years when the crop should be replaced. Cut the crop at the base 50mm above the ground and allow 2 to 3 days in the field for the leaves to wilt before raking and baling. The wilted crop is ready for baling if the skin around the stem can be easily removed. Do not let the leaves to overdry because of the risk of severe losses. Start baling very early in the morning when dew helps in reducing losses. Collect and remove the hay from the field as soon as possible and store in a barn protected from rainfall and sunshine.

Under good management yields are more than 8 tons per acre. Given that on average a cow is fed about 15kg per day on top of the grasses to satisfy its nutritional requirements, an acre is enough to feed 2 cows for one year. This is an immense saving given the high costs of commercial feeds.

In conclusion, the single most important forage crop that can bring sufficient increases in milk production when introduced to the dairy herd is lucerne and farmers are well advised to take this crop very seriously.