Main breeds of pigs in Kenya

The main breeds of pigs in Kenya are the Large White, Landrace, Hampshire, and Duroc. Each of these pig breed has its own unique characteristics that make it suitable for a particular production system and market. Pig performance depends on their genetic merit and the environment they are raised in. As you settle for any one breed the market for the pig products should always be a priority as consumers are always very choosy. Here is a description of the five common breeds that are available in Kenya.

Originally developed as an outdoor breed, the Large White is a robust, adaptable and of higher performance than 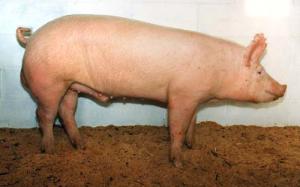 most other breeds. They do very well in intensive production systems. Most pig farmers in the country prefer this breed because of its wide availability.

As the name implies, Large Whites are long-bodied, large sized pigs with white skin and fine white hair free from black hair. The head is moderately long, ears are usually erect and the face slightly dished. They tend to be longer in the leg than are other breeds, long deep sides and long middle and light shoulders.

The breed is a late-maturing type, hardy animal that can withstand a wide range of climatic conditions. The sows have been noted for their large litter size (10 to 12 piglets), their high milk production and for having excellent maternal instincts. However the breed is very prone to sunburn because of lack of pigment on their skin therefore rendering them less suitable for extensive production systems.

The Large White is commonly used in crossbreeding or hybrid programs, with the most popular cross being Large White and Landrace. This cross is often used as the maternal line in commercial herds. A third breed such as a Duroc or Hampshire is often used as a terminal sire.

Their hams tend to be of a lesser quality compared to other breeds, but have a high lean meat to fat ratio, making them suitable for the modern market. Their crossbred offspring have a better meat structure.

Originally developed in Denmark by crossing the native pig with the Large White, The Landrace is a flexible breed 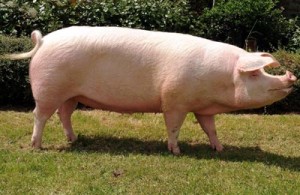 performing well under either indoor or outdoor systems of management. Its excellently fleshed carcass is ideal for either fresh pork or bacon production.

Landrace have white skin also free from black hair. With a straight snout, their ears droop and slant forward. They have a long middle and light forequarters, and excellent ham development. Sows produce and rear large litters of piglets with very good daily gain ( ADG) and high lean meat content ideal for either pork or bacon production. Its coat and skin color makes it prone to sunburn.

The Landrace is popular in cross-breeding programs with the Large White breed. The greatest strength of the breed is its acknowledged ability to improve other breeds of pig when crossed to produce hybrid gilts.

The breed has superior carcass quality mainly because of the large size of their eye muscle. In addition, the Landrace is noted for its early, rapid growth, and its weight at weaning is higher than that of other breeds.

Although not as prolific as the Large White and tends to be slightly fatter, sows can produce and rear large litters of piglets with very good daily gain and high lean meat content.

Also referred to as the "Red Hogs" the Duroc is an older breed of domestic American hog. 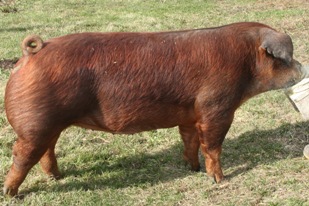 It can survive in extreme cold and wet conditions. Its tenacity in looking after its young combined with its docility makes it an ideal outdoor pig. The flesh is succulent and heavy muscled makes it very suitable for anything from light pork to heavy hog production. Durocs are some of the sweetest hogs in the world.

With small, slightly drooping ears the Duroc is a large-framed, medium length, and quite muscular late-maturing type, excellent for heavy-carcase production. The forequarters, particularly the head and neck, are light and it has small lop ears. The thick coat and hard skin has a solid reddish color, varying from gold to a deep, brick red. They have a medium length and the face is slightly dished.

Traditionally, Durocs have been use as terminal sires when crossed with Large White/Landrace cross sows. This cross is very suitable for the bacon.

The Duroc or Duroc cross does not make a good maternal sire. Litter size is lower than that of other breeds and the boars are known to be aggressive.

The Hampshire was developed in the United States of America. Regarded by many as the best terminal sire breed 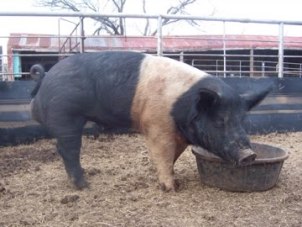 for all purpose, the breed having the leanest meat is used extensively as the sire of cross-bred pigs for pork.

They are large, hardy breed with black and white markings. Their head, ears, and shoulders are usually black, as are their rear legs and tail. They have large upright ears.

They are a favorite of small farmers because of their good temperament, fast growth rate and large litters usually between 8 and 14 piglets and sows make excellent mothers.

It can cross with nearly any other breed and those traits will hold true. It is used extensively as the sire of cross bred pigs for pork and bacon production. The Hampshire is very prolific. It produces an abundance of lean meat and has more meat than the large white or Landrace.

Other breeds worth mentioning are the Pietrain and saddleback.  The Pietrain Pig is a breed which was native to the village of Piétrain in Wallonia, Belgium. The Pietrain is famous for its high yield of lean meat but is associated with the presence of the halothane gene. The saddleback pig was the precursor to the Large White and passing on most of its characteristics and performance.