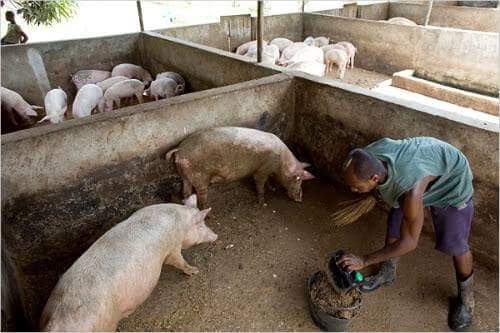 Feed all animals twice a day with a restricted amount of dry concentrates and free access to fresh water. Restricted access is used for the following reasons:

The feeding standards used are available at the National Research Council and Kenya Bureau of Standards.

Other available commercial feed mixtures for pigs are cereal balancers used to mix with home grown cereals, and skim balancer used together with skim milk.

No simple feedstuffs contain all nutrients pigs need in the correct proportion. A feed mixture will principally be composed of

Routine daily cleaning – Remove the manure from all pens twice per day.

Clean empty pens to reduce transfer of diseases. Thoroughly and mechanically clean by scrubbing with water and brush all pens which are emptied when either the pigs are sent to slaughter or transferred to other pens.

Prepare farrowing pens because newborns are more susceptible to all diseases than older pigs. One of the most important steps in reduction of mortality in pigs is to provide the newborn pigs with an optimal environment. About one week before the expected time for farrowing the sow is brought into the farrowing pen. Before this clean and disinfect the pen and wash the sow then treat for external and internal parasites. Equip the creep area when farrowing is expected to ensure an environment with optimal temperature and humidity free from draught.

The weight at birth, 2,3,4,6 and 8 weeks indicate milk production in the sow and mothering abilities.

Weigh growing pigs once per fortnight and when approaching market weight once per week. This is useful for

Method for estimation of liveweight

Suckling pigs can easily be weighed by an ordinary scale. Older pigs (20 kg upwards), however, can only be weighed in special scale designed for weighing animals. Heavier animals are cumbersome to handle.

The liveweights can roughly be estimated from the heart girth. The weight can then either be estimated directly from the weigh band or from tables. Such tables vary according to type of pigs, breeds and level of feeding.

Castrate all male pigs to avoid the “Boar taste” which develops in boars approaching sexual maturity. Castration is easily done at 3 weeks of age. Avoid castration of sick pigs and check for malformations such as cryptochidism, hernia and intersex.

Spray against external parasites such as lice and mange. Spray sows once or twice leaving a three weeks interval. Then spray the last time one week before farrowing.

Spray growing pigs and boars when necessary. Don’t spray during the last week before slaughter.

Deworming should be done at the same time as spraying.

Although ear tattooing is cheap and can be used on new born, it can be difficult on older pigs. Ear notching is also cheap but one must know the system to be able to interpret the numbers. Notched ears can be damaged during fighting or ear biting and cannot be used on new born. Ear tags are easy to read but expensive and can be lost.

Practically all newborn pigs are tattooed and ear notched at weaning. Breeding animals are ear tagged

Factors to consider when selecting breeding animals ranked according to importance.

Gilts have their first heat at 5 – 6 months age. They should not be served before 8 months and 100 kg liveweight.

Sows come on heat 2 – 5 days after weaning, depending on length of suckling period

The length of heat is between 40 – 43 hours and ovulation takes place in the beginning of the half of the estrus period.

Signs of heat include swelling and reddening of vulva and discharge of mucous, changed behavior, restless, loss of appetite, and riding on others.