Importance of dairy goats in mitigating the HIV/AIDS pandemic

Dairy goats are easier to keep than cows. For instance, goats consume less, occupy less space than cows, but produce enough milk for a moderate family. One cow consumes more or less the equivalent quantity of food which 15 to 20 goats would normally eat. Poor HIV infected and affected families, who are the majority of HIV patients in Kenya, require less demanding but high return occupation to meet their inordinately high daily nutritional needs. 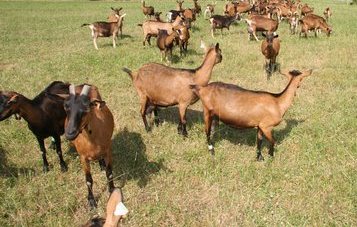 Because of the less demand by dairy goats these households can raise them on their typically diminished parcels of land and meet these nutritional demands. “They are equal to the value of a field for growing crops because of their outstanding nutritional contribution to wellness”- Prov. 27:26.

Of particular importance is the goat milk which is an unequalled type of feed for the health, growth and development of infants, especially where there is a high prevalence of HIV and AIDS and high unemployment rates. “You shall have enough goats’ milk for your food, for the food of your household and for the maintenance of your maidservants.” Proverbs 27:23-27.

Goat milk is a culturally and economically viable option in mitigating HIV and AIDS disease because there are no social barriers to its use. Almost 5 million tons of milk is produced by 440 million goats worldwide and its use is universally accepted.

Selenium, a trace mineral, is very commonly deficient in the human body. Goat milk is the highest source of selenium of any of the milks including human breast milk. Selenium is necessary in the control of the human immune system and its deficiency has been linked to HIV/AIDS and other viral diseases. Selenium also works directly on viruses preventing them from replicating by improving the T cell function.

However, goat milk is currently not regularly consumed in Kenya because local goats only produce enough milk for their own kids. Majority of people who have tasted goat milk know that it is thicker than cow’s milk and more nutritious. It is not possible to buy goat milk in markets because insufficient amounts are produced. Access to goat milk is a major constraint and therefore the need to promote the important breed of dairy goats to increase quality breeding stock and to raise the member’s income from sales of goat milk in the country.

Goat milk has many other health benefits because it contains more minerals, proteins and digestive enzymes than cow milk. This has been recognized from the ancient Eastern culture to Modern day Western culture. For example it is said that Cleopatra maintained her legendary beauty by bathing in goat milk. Goat milk is a great skin moisturizer and rejuvenator.

Goat milk does not produce acid in the intestinal system and instead, because of the presence of the amino acid L-glutamine, helps to increase the pH of the blood stream. L-glutamine is an alkalinizing amino acid, often recommended by nutritionists. Acidic blood and intestinal pH levels have been linked with fatigue, headaches, muscle aches and pains, sore pressure points, excess weight, blood sugar imbalances, and excessive yeast populations.Goat milk has more acid buffering capacity and it has long been used and recommended as a supplement to reduce indigestion, and to help soothe irritated areas in the stomach or intestines.

Goat milk and goat milk products can be tolerated by most of those who are lactose intolerant. The rapid digestion of goat milk ensures lactose does not remain for long periods of time in the intestines, where it can ferment or cause an osmotic imbalance, followed by digestive upset. Furthermore, goat milk contains 7% less lactose than cow milk.

Goat milk has smaller protein molecules, and the fat molecules have thinner, more fragile membranes. This means that goat milk is less "tough", and easier to digest. It has been shown that goat milk will digest in a baby's stomach in 20 minutes, whereas pasteurized cow milk takes 8 hours.

Goat milk contains twice the content of medium chain fatty acids, such as capric and caprylic acids. These fatty acids are highly antimicrobial.

Goat milk does not contain the complex of proteins that are the main stimulants of allergic reactions to cow dairy products. Therefore, it does not stress/depress the immune system. Allergic reactions to cow-milk such as wheezing, congestion, frequent ear infections, eczema, skin rashes and digestive troubles can be done away with when goat milk is substituted for cow's milk.

Goat milk protein contains all the known and essential amino acids which have unique benefits in many metabolic diseases of humans.