Camels achieve puberty much late because of the environmental condition in which it live in, usually around 3 years. However it can be attained as early as 18 months. Breeding should start from 4 to 6 years.

Pregnancy takes approximately 12 months for the dromedary type and 13½ months for the Bactrian. Camels have a slow growth rate therefore to attain a reasonable weight to be served takes a long time of up to 7 years. 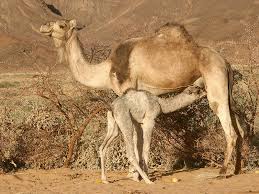 Fast calving is offset because camels can breed for longer years than cows. Camels can have as many as 15 calves by the age of 40 years. Calving interval is prolonged by:-

Generally a camel can get a calf every 3 years. Females come into heat throughout the year around the equator but heat become seasonal further away.

Males show signs of heat during certain times of the year when there is plenty of feed and pleasant weather. Rut (mustch) is the time when grown up males show keen interest in females and is usually difficult to handle them because they fight over females until the dominant one is found.     At this time the males lose appetite and diarrhea frequently thereby deteriorating their working conditions.

A male to female ratio of 1:5 is recommended but this can go to as high as 1 to 80. Males that are not used for mating are castrated although this is debatable as it has been found that uncastrated males have a higher growth rate.

The female heat periods are not spontaneous and for ovulation to occur, copulation is required just like llamas, rabbits, and cats. Copulation takes long – about 30 minutes and others the whole day and they can ejaculate three to four times in one mating.

Breeding animals should therefore not be put to heavy work during the breeding season because this may cause abortions or still births.