A new breed of dairy cattle was launched in June 2010. The breed is a cross between the Friesian and Fleckvieh from Germany. It was introduced by a German firm, Fleckvieh Ltd and has benefited about 500 farmers in Kiambu County. It is said the breed has many advantages which include

The Fleckvieh breed of cattle is said to be a high yielding, dual-purpose cow developed for both dairy and beef production. Also referred to as Miling Simmental because of its origin from the Simmental breed of cattle, the breed was developed in Germany and introduced into Kenya from South Africa in 2009. It is marketed in Kenya and East Africa by Fleckvieh Genetics East Africa (FGEA). Since its introduction the breed has been adopted by more than 20,000 farmers in Kiambu, Malindi and other parts of the country.

A Fleckvieh heifer goes for about Kshs 250,000 making it unaffordable to majority of dairy and 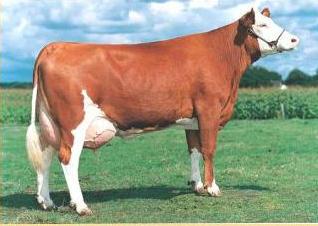 beef farmers in Kenya. The cheapest way to get this breed is through artificial insemination of livestock where farmers can cross with their dairy or beef cows. In this process over 75% of the Fleckvieh genetics is passed to the offspring whereas the general standard for this transfer is 50 per cent. This is a very high rate of genetic gain and dairy farmers can quickly improve their herds in a very short time. Farmers are encouraged to get semen from these top bulls available at a price ranging from Kshs 400 to 800.