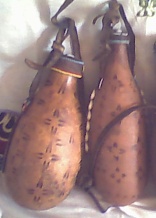 Mursik is sour milk with a sharp almost bitter taste popular among the Kalenjin community. To the newbies mursik may look “dirty” until they

get a good taste of the beverage. When hit on the palate by the sweet crispy flavor most overlook the “dirt”, which is actually a herb that is burnt and ground to charcoal powder and blended in the milk during fermentation. The milk is typically served from colorful gourds or sotet, a tradition that has fast been elevated to the national psyche as a ritual in honoring Kalenjin heroes and athletes for astounding achievements.

Due to widespread awareness on hygiene standards and changes in lifestyles, pasteurization of milk as a first step is requisite. Earlier on direct milking was done into a treated gourd then the milk would be mixed with blood and stored in a cool place to ripen.

Fresh boiled milk is covered to avoid contamination and allowed to cool down before pouring into a treated sotet. The sotet is then corked tightly with a treated lid and stored in a cool place for several days, usually three but can be up to one week, to allow it to ripen.

New and old gourds are first cleaned and left to dry in the sun for a few days. Cleaning is done using bow shaped branches of palm trees or sosiot whose edges have been pounded until they become brush-like. The inner linings of new gourds and the coating of previous milk stored in old gourds are removed to prevent passing bitter taste to mursik.

Treating the sotet is the hard part and requires extreme care and skill. The skill is passed from generation to another.  Cassia didymobotrya (acacia) or sertwet is the preferred tree for imparting preservative and aromatic effect to milk. The sertwet herb added to the milk helps in quick fermentation and has medicinal value. Other popular ones include simotwet and wattle but Senetwet is by far the most commonly used because of its availability. Burning embers of sticks from the tree branches are put inside the clean dry sotet and shaken vigorously to drop the charcoal formed and to avoid burning the gourd. Using the iitet, a tool used as a mortar in many mursik preparation sessions, the embers are methodically pressed and ground against the wall of the sotet in a circular in and out motion of the hand, an action described as suutet. This action is repeated until the charcoal powder is evenly distributed on the walls of the gourd. Excess and large particles of charcoal are discarded and the gourd is allowed to cool down. The sotet is now ready for the freshly boiled cool milk.

The gourd can be filled in one or several portions depending on availability of milk. One portion filling is however the most preferred because it avoids many problems related to milk quality, flavor and exposing to harmful bacteria.

Shake the sotet to stir the mursik into fine sour milk with smooth and uniform consistency.  White globules of butter occasionally float at the top of the gourd when milk is ripe. A good ripe sotet should produce a popping sound upon tapping the lid, allowing excess air to escape. Mursik can be taken on its own or served as a supplement cold with hot ugali.

What is the future of mursik?

Mursik has been around for the last 300 years as a traditional method of preserving excess milk. Popularity of mursik has surpassed all the other versions of sour milk and has become part of the national heritage.  Its time to patent mursik and pack the milk in branded packets. Athletes can do a good job in marketing the product as they have international name recognition. Mursik has been identified as a product that can be branded and sold in shops across the country or exported as a product of the Kalenjin community or Kenya. The growing market for traditional foods puts mursik as one of the products that can be harnessed and value added to fetch stable income for the producers.  Issues on quality and acceptability of the “charcoal” by a wide range of consumers can be sorted out.

Coupled with mursik is the sotet. Women can make a living out of decorating the precious gourds. Prices of gourds vary from Kshs 200 to Kshs 1,500 depending on sizes.