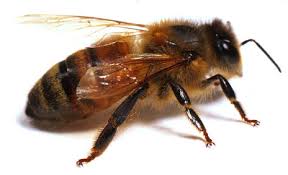 Worker bees are the majority and a healthy colony can have 50,000 to 60,000 members.  Their transformation takes 20-21 days. On average, the lifespan of the worker bees ranges between 35 to 45 days.

There is no rest for the worker bee. In addition to searching for nectar and pollen and then making wax and honey, the worker bee must feed the queen and larvae, build and repair the hive, help keep the hive cool by fanning her wings, and protect the hive against enemies. Worker bees defend the hive with a stinger that becomes detached along with a venom sac after the sting. The worker bee dies shortly after the sting. For the first three weeks of their adult lives, the workers confine their labors to building the honeycomb, cleaning and polishing the cells, feeding the young and the queen, controlling the temperature, evaporating the water from the nectar until it thickens as honey, and many other miscellaneous tasks

After being laid in the cell the eggs takes three days to hatch where the larva emerges. The larva migrates to the bottom of the brood cell. Nurse worker bees immediately enter and leave a tin drop of royal jelly near the larva. During the first five or six days after hatching, each larva receives as many as 2,000 visits from various nurse bees. The food (water, pollen and honey) supplied only in 100 to 200 of these visits. The rest is inspection visits.

By the time a larva is six or seven days old, it becomes large enough to fill its cell. Worker bees then place a cap (made of a mix of wax and pollen) over the cell entrance. A few days later the larva sheds its skin and it turns into a pupa. After a few more days the pupa gradually becomes tan in color. Finally it becomes light brown, then a few hours later the pupa’s skin split and an adult worker bee comes out. This takes place on the twentieth to twenty first day after the egg was first deposited in the brood cell. The new worker chews away the cell cap and crawls out to join the other bees. After leaving the cell the young bee looks very fragile and insecure and is completely harmless.

From the moment a worker bee is hatched, she has many varied tasks clearly set out for her. The specific job and duties workers perform during their short life varies with age. The tasks can be grouped into two main phases of 21 days each: in the first phase worker bees take care of the hive. For the first three weeks of their adult lives, the workers confine their labors to building the honeycomb, cleaning and polishing the cells, feeding the young and the queen, controlling the temperature, evaporating the water from the nectar until it thickens as honey, and many other miscellaneous tasks; and in the second phase they function as field bees and defenders of the colony.

The first task is to clean out the cell from which she has just hatched. This and other cells will be cleaned and polished with propolis to disinfect them, and left immaculately clean for storage of nectar and pollen.

The next task is to feed and care for the developing larvae – the role of nursing bees. Young larvae are fed with royal jelly and then pollen, honey and water. They also feed the queen with royal jelly and even remove her excrement from the hive during the last part of this period. The number of days spent tending bee cells depends upon the quantity of such cells in the hive and the urgency of other competing tasks.

At this age bees have matured enough to begin producing beeswax from their glands. They help with the building of new combs and in the capping of cells containing developing pupae and ripened honey.

During this time young worker bees take nectar and the pollen from foraging field bees that are returning to the hive. This task is technically called food exchange. Afterwards the nectar and pollen is stored in the honey combs’ cells earmarked for this purpose.

The last task of the house bee before she ventures out is guarding the hive against external threats. At this stage of maturity her sting glands have developed to contain good amount of venom.

Now the worker bee ventures outside the hive to become a foraging field bee. At this point she forages for pollen, nectar, water, propolis and honeydew. The range of movement of the forager bee is about 3 km away from the hive. An average foraging bee visits a range of 150 to 220 flowers each day, makes 20 – 50 trips per day at a speed of 20 km per hour. She usually operates from 6 am to 11 am and from 2 pm to 4-5 pm.

In addition there are other tasks that worker bees carry out interchangeably when particular circumstances occur, such as taking care of the drones, fanning to regulate the temperature within the hive, and helping other members of the colony back to the hive.

Workers do not mate and therefore cannot produce fertile eggs. They occasionally lay infertile eggs, which give rise to undersized sexually viable drones. Under normal conditions female worker bees’ ovaries are inactive as their development is prevented by pheromones emitted from the queen and her brood. However, when a colony loses its queen and there are no fertile eggs or worker larvae of an appropriate age to raise a new queen from, one or more worker bees will partially activate their ovaries and commence to lay eggs as a result of the absence of queen and brood pheromones. The process of developing a laying worker usually takes 3-4 weeks after the loss of the queen, and by the time all the brood has emerged. The laying workers take the place of the proper queen, they emit a pheromone, which mimics that of the queen scent and inhibits the other workers to lay eggs.