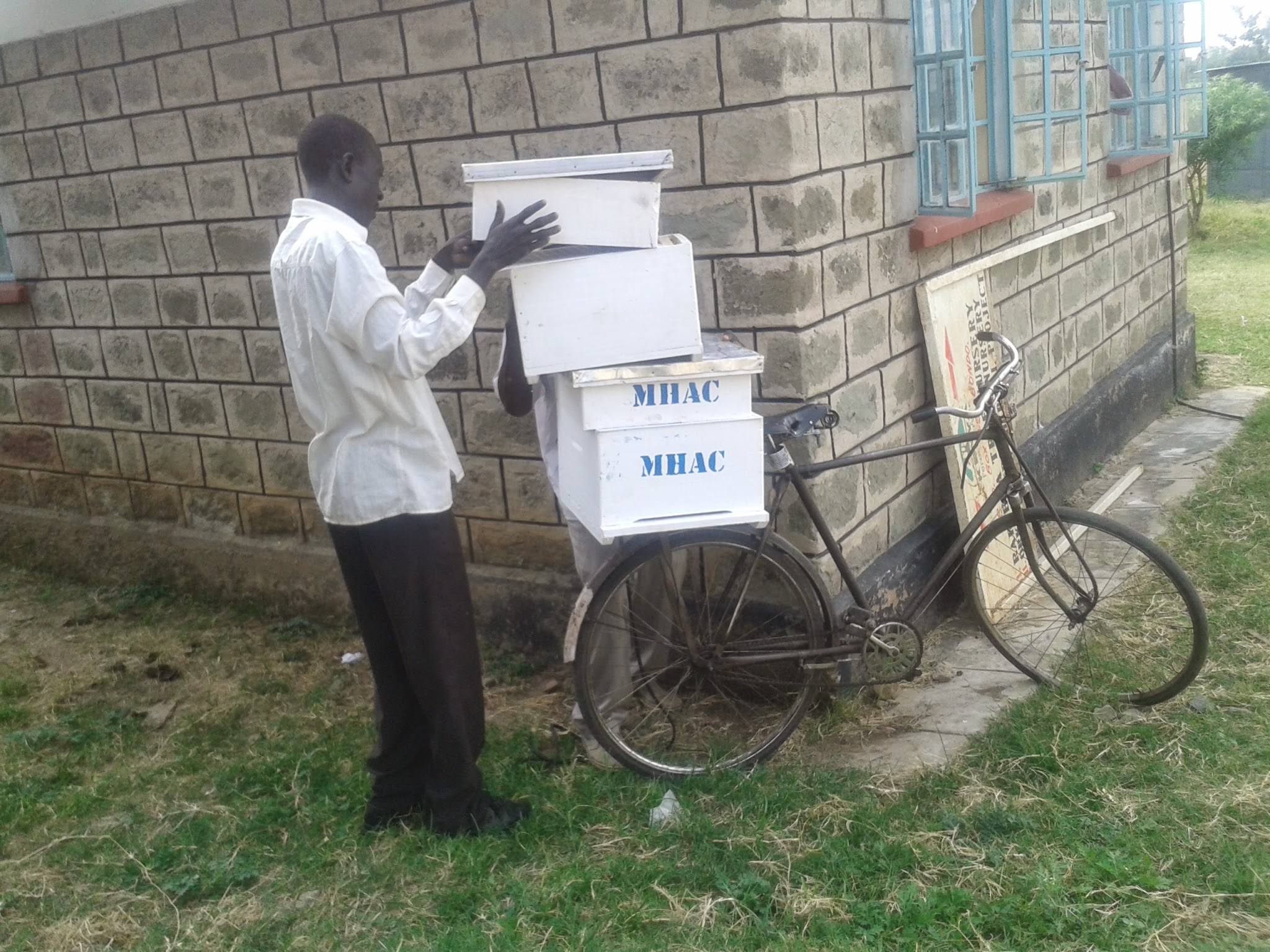 Honeybee colonies can be obtained to stock empty hives through trapping swarms or making divisions out of existing strong bee colonies.

Swarms that hang on such places as tree branches, ceiling, shrub, fence post, or on the side of a building can be collected by use of a catcher box or enclosed container (a cardboard box with a tight-fitting lid works well).

Swarms contain as many as 25,000 bees plus the queen. Three considerations to keep in mind before attempting to collect a swarm are

Trapping of swarms can be done by use of a hive or a catcher box.  A catcher box is more suitable.  The catcher box is placedon a suitable locality for trapping bees during the swarming season or on known migratory routes.  Occupation in such cases takes place in as little as a few hours or weeks.  Waxed catcher boxes or old hives get occupied more quickly.

Using protective clothing the bees can be shaken into the catcher box. Remove the swarm gently, disturbing the cluster as little as possible, and put it directly into the catcher box or an enclosed container to transport it to a new hive or location as explained later under this topic.

The purpose of dividing strong coloniesis to increase or multiply the number of bee colonies to the beekeeper.  It also controls natural swarming of bees whereby in most cases if not controlled the beekeeper ends up losing the swarms.

A strong colony can be split into two smaller colonies of roughly equal sizes. A division is made out of a strong colony into a catcher box using the following procedure:-

From the strong colony pick out 5 combs or brood containing the followingand place in the catcher box or a separate hive:

Then shake some bees into the hive or catcher box.Replace the frames removed from the original colony with either old comb or new foundation frames. Avoid unnecessary infighting by ensuring that all adult bees are taken from the same colony.Place the frames with adhering bees in the center of the new hive. Next, introduce a new queen or queen cell and add old combs to fill up the hive body.

You can also divide a strong colony within the same hive using a double screen. Place the old queen with about half the combs in the bottom brood chamber. If possible most of the combs should be unsealed. Add an extra hive body with empty combs or combs with honey. Put the double screen on top of the second hive body with the entrance facing to the rear of the hive.

Then put the second brood chamber containing five to six frames of brood, mostly sealed, and two combs of pollen and honey on each side, above the double screen. Introduce a new queen or queen cell into the upper unit. When the sealed brood hatches, the new split will be composed of mostly young bees. This split can be removed from the parent colony a few weeks after the queen has started laying eggs.

Feed the new colony sugar syrup or combs of honey. Add a second hive body after 4 to 6 weeks. If provided with plenty of bees and food, the new colony may become strong enough to store some surplus honey. The parent colony from which the increase was made is less likely to swarm and should eventually produce as much honey as it would have without being split.

Transferring of bees from a catcher box into a hive

Seal or block the entrance of the catcher box. You can make use of toilet papers or other suitable material.  This prevents bees from getting out as well as disorientating them especially if you intend to transfer them to a nearby hive.

The best time to move bees is around dusk, when most of the bees have returned to the hive and are no longer flying. Moving bees at daybreak exposes bees to stress because of increasing light intensity and rising temperatures. A cool, rainy day is also an appro­priate time to move bees at any hour, so long as the bees are not flying.

Secure hive bodies together with wide staples or plastic or metal bands. The entrances of hives should be closed with wire screen while bees are in transit. Before loading, smoke the hive entrances and push the entrance screens into place. Shut all other hive openings.