How your Cows will never have to face starvation again 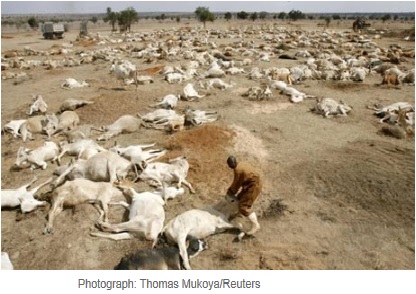 Year after year many cows in the tropical and subtropical areas of the world die of starvation.

Over centuries farmers in the colder regions of the world have learned to cope with winters when not a single blade of grass will grow for months on end. Their continued success can be attributed to long term storage and conservation of forages and meticulous planning.

And curiously enough, it is only in the world’s really hot regions that the quality and feeding value of forages can actually be improved through conservation! Meaning that you can feed more cows, who will give more milk, with the same amount of silage compared to the original forage you started out with!

You think this is impossible?

One of the best articles I have ever found about the subject which fully explains the theory and logic behind above assertion is http://www.livestockkenya.com/index.php/livestock-feeds/286-how-to-utilize-maize-stover-as-animal-feed and this should be read and full understood before you start making silage yourself. When not done properly silage will completely spoil or even become harmful to your animals, so my advise is to see a more experienced farmer who has succeeded in the "Art of silage making" and follow his advise!

Following more practical and illustrated approach is shared from http://www.makitosha.com/activities.htm, where even more information about silage making as well as haymaking can be found.