The llama is a viable livestock entity in Kenya

The llama has recently been introduced to Kenya from Peru in South America. Currently there are just about 200 of them in Kenya, and they are doing very well at Egerton University and a farm in Nanyuki. Although llamas are among the world's oldest domestic animals, they are new to Kenya and just a handful of

people in the country have seen one.  Having characteristics resembling a camel, sheep, goat and horse all wrapped together one can easily get confused as to its species.

With a Life span of about 15 to 29 years the llama is actually a pure species belonging to the camelid family. Other members of this family are the alpaca, the wild guanaco and wild vicuna. The llama is a domestic herd animal which is used primarily as a beast of burden but also provides meat, wool, hides and manure. Adults stand between 100 and 130 centimeters at the withers and weigh between 100 and 200 Kg.

There are two breeds of llama, one with fine fibre and the other with coarse fibre. The wool color range from white to black and many shades of gray, beige, brown, red and roan. These colors may be solid, spotted, or marked in a wide variety of patterns. The fibres are separated into different fleece types defined as woolly, silky and suri. The fiber can be spun and woven into sweaters, blankets, hats and other woolen products.

Females (dams) are considered mature enough for breeding between two and three years although they the first breeding can be as early as 16 to 24 months of age. Early breeding can be detrimental to both adult and the cria. Being induced ovulators heat cycles do not exist. Ovulation occurs 24 to 36 hours after mating and breeding can be at any time of the year. During breeding males make a distinctive orgling sound.

The gestation period is roughly 345 to 350 days with just a single baby (cria) weighing between 9 and 16 Kg delivered from a standing mother usually without assistance. Twins are extremely rare. The cria is quickly active and usually stands and nurses within 90 minutes. Llamas can be rebred two to four weeks after giving birth but it is not necessary to breed a female every year. The cria is weaned at 4 to 6 months of age.

The llama is both a browser and a grazer. They graze on grass or browse on shrubs and trees. With a three-compartment stomach, llamas are modified ruminants that chew their cud. 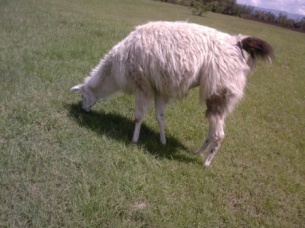 A llama costs much less to feed than other comparable-sized animals. An adult llama will eat one 25 Kg bale of preferably grass hay every seven to ten days. Llamas have low protein requirement and an efficient digestive system therefore they can be kept on a variety of suitable pastures or hay. Lucerne hay is high in protein and can cause problems and interference with calcium. These are supplemented with recommended vitamins and minerals. Water is required at all times.

Grain can be used as a supplement when required, especially for pregnant and lactating females. Dairy meal can be supplemented at 3 Kg for seven days per animal.

Llamas are susceptible to similar diseases that affect sheep and cattle along with both external and internal parasites. The recommended primary care is yearly vaccinations, routine dewormings, and regular hoof trimming.

Males can develop sharp teeth called fighting teeth in their third year. These teeth may need to be dulled or removed at the gum line.

Shearing of wool is done to prevent heat stress during extreme heat periods and fans can be placed in barns to give better air circulation.

The llama is a highly sociable animal and companionship is very important.  They need to be in the company of a llama herd, or other herd animals like sheep, goats, or cattle. Care should be taken when mixing with horses  because they can be seriously injured by the kick of a horse. They are curious, gentle, cooperative, quiet, and patient.  Being generally intelligent and calm animals they are easy to train.

Other than providing meat, milk and wool llamas are:

0 # Reto Casanova 2019-11-17 18:48
Hi
At Mombasa Go-Kart we keep already a few animals like donkey, camel, tortoise, geese and more as pets. We would like to expand this to a small petting zoo for our customers.
Two Ilamas would fit perfectly. Any chance to get somewhere?
Warm Regards, Reto
Reply | Reply with quote | Quote
0 # Joe kw 2021-12-11 12:58
Hi,
these animals are bred at Egerton University livestock premises, and some farmers around Njoro area have bred spills from the university via community groups. There is a ranch in Laikipa that keeps them too. unfortutanately, i got no direct referal contact.
Reply | Reply with quote | Quote
Refresh comments list
RSS feed for comments to this post