How to make high quality silage 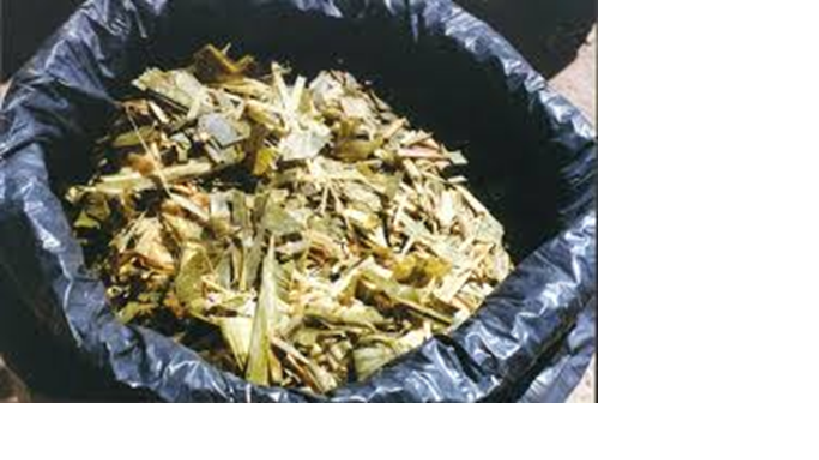 High-quality silage is the result of adoption of appropriate techniques, starting with soil preparation and fertilization. The crop must have high dry matter content, adequate nutritional value, and good characteristics for fermentation during the ensiling process. Even if high-quality crops

are harvested efficiently, losses in silage making can occur if the ensiling process is inadequate.

Silage undergoes anaerobic fermentation, that is fermentation in the absence of air, which starts about 48 hours after the silo is filled, and sugars is converted to acids. Fermentation is essentially complete after about two weeks. Before anaerobic fermentation starts, there is an aerobic phase in which the trapped oxygen is consumed. How closely the fodder is packed determines the nature of the resulting silage by regulating the chemical reactions that occur bringing about decomposition of the carbohydrates present into acetic, butyric and lactic acids.

When silage is prepared under optimal conditions, the modest acidity also has the effect of improving palatability and provides a dietary contrast for the animal. However, excessive production of acetic and butyric acids can reduce palatability: the mix of bacteria is ideally chosen so as to maximize lactic acid production. If the fermentation process is poorly managed, sour silage acquires an unpleasant odor due to excess production of ammonia or butyric acid (butyric acid is responsible for the smell of rancid butter). Silage inoculants contain one or more strains of lactic acid bacteria, and the most common is Lactobacillus plantarum. Other bacteria used include Lactobacillus buchneri, Enterococcus faecium and Pediococcus species. See Role of microorganism in silage making.

This phase begins from the time of harvesting the crop to the time oxygen is depleted from the sealed silo. Due to continued plant respiration, plant enzymes and aerobic bacteria cause nutrient losses by degrading plant proteins and converting sugars into carbon dioxide and water, and generating heat. The heat increases the silage temperature by 15 to 20°F or more, depending on the amount of air available. This phase progresses until the oxygen is depleted. It takes a few hours ideally but can last for up to 48 hours in poorly made silages. Harvesting at the correct plant maturity, chopping to the right particle length, packing the silo tightly, and sealing within 12 hours of harvesting are key to minimizing nutrient losses during this phase.

This phase starts after the oxygen is used up, when anaerobic bacteria begin to ferment plant sugars into organic acids, alcohols, carbon dioxide, and nitrogenous compounds. The organic acids lower silage pH from above 6 to about 5. If silage pH drops slowly and the moisture concentration is high due to harvesting too early, clostridial bacteria may grow. These bacteria degrade sugars and convert lactic acid to butyric acid, releasing strong offensive odors. They also break down protein to non-protein nitrogen and undesirable end products like amines. These changes lead to increased dry matter loss and reduced palatability and quality of the silage.

Once the pH falls below 5, the lactic-acid-producing bacteria (LAB) dominate the fermentation and reduce the pH to about 4 in well-made silages. Lactic acid is more effective than other organic acids at reducing the pH. LAB that ferment sugars to lactic acid alone (homo-lactic LAB) are more efficient at causing a fast pH drop and preserving nutrients than others (hetero-lactic LAB) that produce lactic acid and other products. This phase can last for three days to four weeks, and it ends when fermentable sugars are depleted. This phase is often limited in warm-season grasses and other forages with low sugar concentrations (less than 5%–8% of dry matter) because of inadequate amounts of sugars for the fermentation.

Once the pH drops to or below 4.0, the silage becomes stable, and the growth of undesirable microbes is prevented. The quality of the silage can be maintained for the rest of the storage duration if the silo remains sealed, and air does not penetrate the silo.

This phase begins after aerobic conditions are restored once the silo is opened during feed-out. After air penetration occurs, yeasts and molds that were dormant during the fermentation are revived. These fungi use sugars, lactic acid, and other nutrients for growth and produce carbon dioxide and heat as byproducts. Excessive heat accumulation denatures proteins and other nutrients in the silage and increase DM losses and reduce silage quality. Moulds on the silage may also produce mycotoxins that when consumed reduce animal performance and cause various diseases. To prevent these problems, excellent management is necessary, particularly in bunker or drive-over pile silos. The silage should be fed out at a rate of at least 8–12 inches per day, and a straight face should be maintained with shavers. Additives or inoculants that hinder the growth of spoilage yeasts and molds will increase bunk life and preserve the quality of the silage.

Factors that affect quality of silage

Harvesting should be planned for dry days because small amounts of rainfall can reduce silage quality. Forages that have excess (>70%) or inadequate moisture (<45%) may not ensile well for different reasons. Higher moisture concentrations can result in greater seepage losses and possible pollution of nearby water bodies. Such high-moisture silages are also more likely to undergo a clostridial fermentation, which leads to high DM losses, protein degradation, high butyric acid concentrations and reduced palatability. Therefore wilting high-moisture forage to at least 35% DM is a good practice that reduces clostridial fermentations. Wilting usually results in good silage, particularly when sugar concentration is low and buffering against pH decline is high.

Minimizing air (oxygen) infiltration during ensiling is essential for making good quality silage. The presence of air in the forage mass after harvest allows the respiration process to continue, and this depletes sugars essential for the fermentation. Air exposure during storage leads to yeast and mold growth on and beneath exposed surfaces. Air exposure at feeding also results in rapid yeast and mold growth, heating, and reduced palatability.

Water-soluble carbohydrates (mostly sugars) are used up during plant respiration until the oxygen that remains in the forage mass is depleted. These sugars are the primary carbohydrates fermented to lactic and acetic acids by bacteria to produce a low pH and stable silage. In general, forages with less than 5% to 8% water-soluble carbohydrates in the dry matter may not reach a pH low enough to produce stable, high-moisture silage. Maize, sorghum, sorghum-Sudan hybrids and cool-season annual grasses usually have sugar concentrations above 5% DM, and a good, stable silage is often achieved.

Forage crops, such as warm-season perennial grasses and legumes, have low sugar concentrations, and the high protein concentration of legumes buffers (slows) the pH decline from 5.5 to 4.5 during ensiling. Consequently, these forages are more difficult to ensile and should be wilted to 35% to 45% DM before ensiling, which can be challenging therefore additive or inoculant application may also aid the fermentation of such forages.

Molasses can be used to add fermentable sugars to forages low in sugars such as legumes. Adding molasses at ensiling can increase the fermentation rate by increasing organic acid production and lowering the pH. Other high-energy ingredients, such as ground maize and citrus pulp, may be added to increase the dry matter concentration in wet legumes, and they often increase the energy value of the silage. However, molasses and other sugar or high-energy sources should not be added to maize, sorghum, or cool-season grasses (e.g. Ryegrass) at ensiling because the excess sugar availability will likely stimulate the growth of yeasts and increase spoilage

What happens when we ensile forage with high moisture content?

What happens when we ensile very dry forage?

It is good to Remember

It is not easy to make high quality silage. Starting with the crop containing high nutritional value that usually is expensive and requires much care, ensiling process needs specific machinery, physical structure (silos), and plastic sheets for the coverage. Farmers cannot afford the risk of losing the entire crop with a poorly made silage.

Some crops that have better nutritional value also have good ensiling characteristics such as maize and sorghum. However, to ensure high-quality silage it is often necessary to use techniques such as crop wilting and application of additives, which can make the process more expensive.

A quick and efficient fermentation process and reducing the pH is most desired at ensiling and this depends on the anaerobic environment, water activity, and substrate for LAB fermentation. The homo-fermentative LAB are the most efficient in preserving the crop characteristics while some hetero-fermentative LAB are also desirable because of its effect on the aerobic stability of silage.