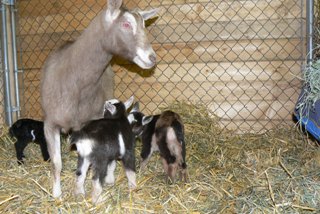 Reproduction in goats is vital for production of milk, meat and fibre. It is the principal goal of the producer so as to have a steady supply of animal products. Reproduction influences the number of surplus animals for sale or culling. Goat products are the end result of reproduction.

Heritability of reproductive traits traits is generally low hence improvement should be based on management practices such as disease control, feeding and cross breeding.

Females should be bred when they reach puberty. Puberty is affected by nutrition, age, type of birth and season. Most goat breeds come on heat for the first time in 5 – 10 months. Breed animals only when they reach 60 – 75% of their mature weight. The age at first kidding is related to puberty. The doe can give birth at intervals of 150 days.

In temperate regions where day and night hours are not always equal, goats are seasonal breeders. Goats there are bred from September to December. The reduction of daylight hours triggers the animal to come on heat. In the tropics goats can breed any time of the year.

Does bred to kid after they are one year old have longer productive lifespan than those breeding later.

Heat period takes about 36 hours although it varies with breeds and other environmental factors. For example Angora goats take 32 hours. Does ovulate 12 – 24 hours after the onset of heat. They should therefore be mated or served within 12 hours after coming on heat i.e. serve does immediately they come on  heat because the sperm survives for 30 to 48 hours and the egg survives only for 16 to 20 hours.

The length of one estrus cycle to the next is about 20 days but the East African Goat takes 17 days. Hormonal functions are similar to cattle.

Fertility is the number of services required per animal per conception, measured as a percentage. The more service required the less the fertility. 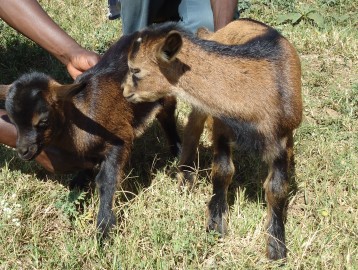 Prolificacy is the number of kids born per 100 does. The number of kids reared from birth to weaning per 100 does, measured as flock percentage, is usually preferred when determining reproductive efficiency. Prolificacy can be affected by the nutritional level during pregnancy. Flashing animals before pregnancy increases ovulation rate hence increasing prolificacy, translated into higher litter sizes.

The average is 150 days but varies according to breed and age, ranging between 143 and 153 days. Young animals have shorter gestation period. The sex of the kid determines the length of gestation period as the males take longer than female. The litter size also affects the length as single takes longer, twins and triplets taking a shorter time.

The service period is very variable and influenced by gestation, lactation and environment. Animals lactating take longer to come on heat. Ideally the kidding interval should be short at 240 days but it varies depending on breeds and lactation period.

Males become sexually mature between 4 and 8 months depending on breeds. Boer goat

mature around 5 months, alpines 6 months and the East African Galla Goat at 4 months. Goats produce a smaller volume of semen per ejaculate than rams and adequate sperm density should be about 2,000,000,000 per ml. Bucks housed together establish a hierarchy and the higher the hierarchy the higher the sperm count.

The service load depends on the age of the buck. Bucks that are 6 to 12 months should serve 2 does per week. One mature buck can be left to run with 20 to 25 females in the field.

Control of breeding cycles by synchronization of estrus

Synchronization of estrus is important for conception, kidding and weaning at the same time. This increases the efficiency of production. Savings on labor cost and other expenses is possible when breeding is done at the same time. There is no need for heat detection; it facilitates the use of AI and overall it increases genetic progress.

Use of progesterone compounds

Animals are prevented from ovulating to allow regression of corpus luteum (CL). If the compound is withdrawn all the animals come on heat at the same time. Intravaginal sponges containing progesterin is inserted into the vagina and left there for 18 – 21 days. The sponges are then removed and animals come on heat 36 – 48 hours later. This has been done in Naivasha.

If PMSG injection (300mg) is used during removal of sponges the degree of conception is high. Implements can be used instead of sponges.

Vasectomized bucks can be used to synchronize females. Does are isolated from bucks for a considerable period of time. All the females come on heat when the two herds are mixed.

It is easier to inseminate goats than cows. A speculum is used where light enables one locate the cervix. It is difficult to insert the gun on pregnant animals those that are not on heat. the cervix forms a plug when the animal is pregnant.