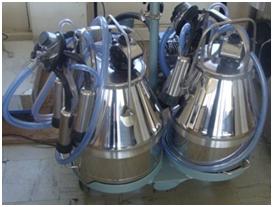 Machine milking is gradually being adopted in many large farms in Kenya because it reduces labour and performs a better quality milking job than hand milking. However, because most dairy farms have small herds sizes and cheap labour farmers do not see the need to install milking machines. This is also because milking machines require power and are more expensive to install compared to the few equipment needed for hand milking.

But milking machines have many advantages over hand milking. For high yielding dairy cows it is normally difficult to ensure all milk is removed from the udder

within the required time. A cow should be milked within 7 minutes. Milking beyond this time is not productive because the hormone oxytocin that stimulates milk production will have long ceased to be effective. Machine milking on the other hand is very fast such that all the milk will have been removed by the end of this time.

Effective milking has a direct bearing on the long term milk yield of the cow. It has been proved that with time cows that are not completely milked gradually reduce milk production whereas those that are completely milked increases milk yield. The importance of complete milking therefore cannot be over-emphasized.  Also note that cows cannot endure delays in scheduled milking without serious reductions in milk yield.

Although the cost of installing milking machines is high, investing in a good milking machine is a good decision if conditions allow. Many types and sizes of milking machines suitable for different categories of farmers are available in the market. Small scale farmers with small herds between 5 to 10 cows can invest on simple milking machines to replace the inefficient and labor intensive method of manual milking.

There are several types which can be broadly categorized as bucket machines and pipeline milking plants.

These are the simplest and least expensive to install. This type of system is suitable for small and medium size herds.  Cows are milked on a level floor of a stable or milking shed. The milking machine is mounted on a trolley with one or two buckets at the base. About 8-10 cows per hour are milked with one bucket type and 16-20 cows per hour with 2 buckets.

This set up has continuous pipeline through which milk is transported direct from the cow’s udder to a common milk reservoir. They are suitable for large dairy farms where the work load is usually heavy.

Parlour milking systems are usually installed in milking parlourssuch as tandem and herring borne. All the equipment is centralized and the cows come to the parlour for milking.

This comprises of a vacuum pump and reserve tank, vacuum regulator, pipelines and long pulse tube(s) forming an enclosed space.

These alter the vacuum level around the teat so that milking occurs without fluid congestion and edema of the teat tissues.

The assembly of four teat cups connected to a claw and mounted with a valve that admits and cuts off the vacuum to the unit.

This transports the milk away from the milking unit toward a storage unit.

Although milking machines copy suckling by the calf, in a way machine milking is different from hand milking or calf suckling. A constant vacuum is applied on the teat to create a pressure difference across the teat canal and keep the machine attached to the cow. The vacuum congests the teats and squeezes milk from the teat. Atmospheric air is allowed once per second to collapse and relieve congestion around the end of the teats creating a pulsation. This pulsation is important as it massages, relieves and prevents damage to the teats.

Although you can install a milking machine for just one cow, it is not an economical undertaking. If the size of the herd ranges between 5 to 10 milking cows then the single cow milking machine is suitable. A herd size above 10 animals will require bigger sized machines.

The level of milk production

Although milking machines can be used to stimulate higher milk yields it is not justifiable to install them for a low yielding herd. Manual milking for cows that produce more than 10 litres per session is often ineffective and milking machines should be considered.

The cost and quality of manual labour

The cost of labour throughout Kenya is not high and this may not be a major consideration. Where the labour costs are high such as in developed countries, automation is necessary so as to cut costs. But skilled milkers are scarce. Those employed to milk do not do a good job, often leaving milk in the udder. Farmers can solve this problem by going for the milking machines.

Most milking machines are powered by electricity so a source of power is important. But where there is no power other alternatives are available in which simple combustion engines or solar energy is used to drive the vacuum and milk pumps.

Machine milking is a highly skilled operation that requires continued use to be perfected. Cows develop habits. If you establish and maintain a persistent milking routine cows will feel comfortable and respond positively with a steady production. An important part of the procedure is the control and prevention of mastitis.

How to use a milking machine

Turn on the machineand attach the four teat-cups.  When a cow finishes milking, take the cups off the cows’ teats. Some milking machines are equipped with automatic devices which sense that the flow has stopped and removes the cups. This prevents over-milking of the cow.

How to introduce machine milking into a herd

Introduce machine milking gradually by following the steps. Start by training the workforce in the procedures, milking routine, handling, cleaning and maintenance of the machine.